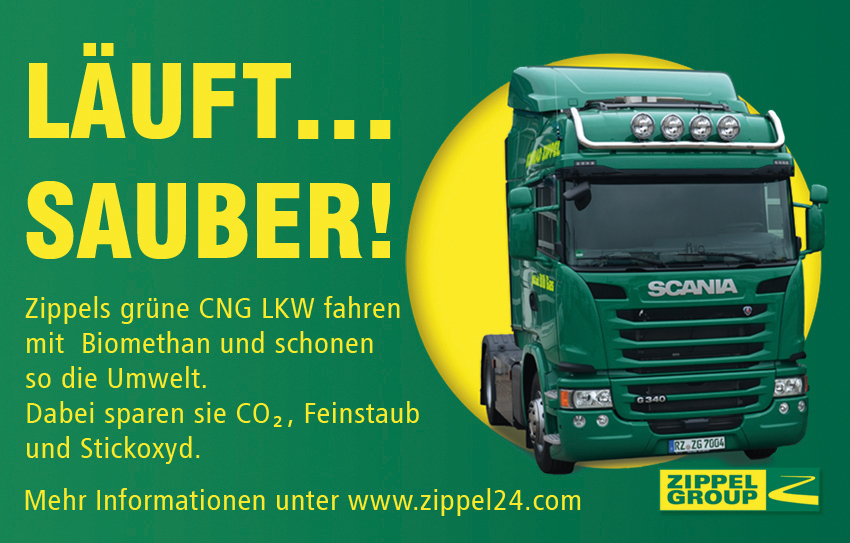 The Zippel Group provides last mile services in combined transport using compressed natural gas (CNG) vehicles that run on biomethane produced from organic waste. This means that all such transports in Berlin and Leipzig are carried out using renewable energy in a nearly CO₂ -neutral manner, further reducing the environmental impact from existing transport chains. What started out as a wager against diesel has since become a cornerstone of everyday operations. The Zippel Group has now been using this environmentally friendly technology for the past two years and seeing positive results.

The first four CNG trucks were deployed for automotive transport in February 2018 in the Schkopau region near Leipzig. Since spring 2019, eight additional CNG trucks have been successfully supporting Zippel’s activities for various clients around Berlin.

When it comes to refueling the vehicles, Zippel relies on its well-established partnership with Gazprom NGV Europe. The fuel infrastructure in Leipzig is optimally geared to the needs of truck operators. In Berlin, however, the fuel stations that have been built in recent years are primarily for passenger car use. Since cars require only around 10% of the fuel volume that a truck does, these Berlin fuel facilities are under heavy strain when also used by trucks. As a result, Zippel is currently planning to work with partners to establish its own CNG supply at the central BEHALA terminal in Berlin. The monthly consumption of 30 tons of CNG reduces CO₂ emissions in the same period by 90 tons, making a considerable contribution to the reduction of greenhouse gas emissions. This is made possible by a partnership with biomethane supplier VERBIO, which feeds the organically derived fuel into the German natural gas grid at its production site in Zörbig. Zippel takes over the supply in a virtual exchange process at the fueling stations in Leipzig and Berlin.

VERBIO biogas is produced from straw and other agricultural waste. After the production process, two round bales of straw weighing a total of 500 kg result in 150 kg of biomethane, the amount needed for a full tank of fuel and a transport distance of 500 km. Of particular importance to Zippel is the fact that no food crops are used to produce its biomethane. The biogas used causes no detriment to the food supply, nor does it contribute to the spread of harmful monocultures such as corn.

Through its usage of these and other biogas sources, Zippel’s last mile transports can be provided on an almost entirely CO₂-neutral basis. After two successful years, the processes have become well established and the extremely positive customer response has prompted the company to continue investing in this environmentally friendly technology.